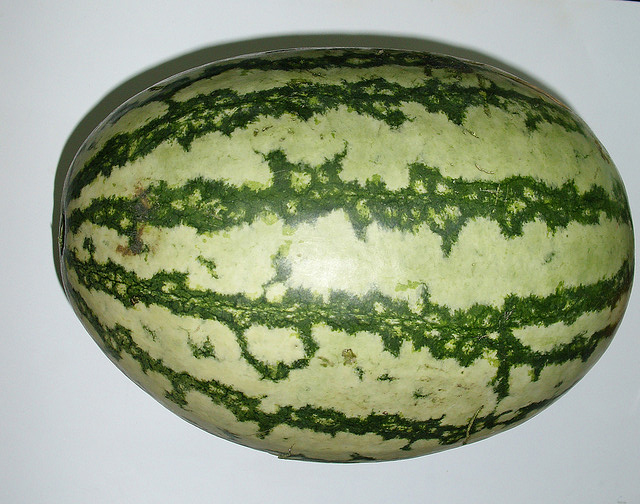 Watermelon is a wonderfully refreshing fruit, especially during the hot North Carolina summers. Watermelon size and color varies depending on type, but often watermelons are round or elongated and the size of a soccer ball or larger. The outer skin should be tough and firm, as well as vibrant green in color. Some watermelons tend to have darker green stripes on their outer skin, and some are even slightly yellow.

Watermelons are ripe after harvesting. Store at room temperature until cut and served. Once sliced, cover watermelon with plastic wrap and store in refrigerator for up to 3 days.

Watermelon is a snack enjoyed raw. It is refreshing and crisp and a great source of hydration. Cooking watermelon will remove much of the water and nutrients from the fruit, but watermelon slices can make great sandwich and salad toppers.

When selecting watermelons, choose those with a vibrant green outer skin. Avoid any watermelons with discoloration or bruising. Watermelons should feel heavy for their size and have bright red or pink inner flesh.

Watermelon production in North Carolina is a great harvest (ranking 9th among U.S. states). Watermelon season tends to begin in early March and extend throughout the summer until late August. Watermelons are warm-weather crops.

Watermelons grow on vines with climbing stems and supportive plant stalks. It could take up to 4 months for a watermelon to fully mature. Ripe watermelons will make a drum-like sound when knocked upon—this is a great way to select good watermelons. Once ripe, they are cut from their vines and ready to be eaten.

Frozen Watermelon Smoothie—Chop and mix watermelons, strawberries, blueberries, bananas, and cantaloupes. Dice or puree in blender until creamy. Freeze or refrigerate until chilled. Remove and enjoy a cool and refreshing summer treat!