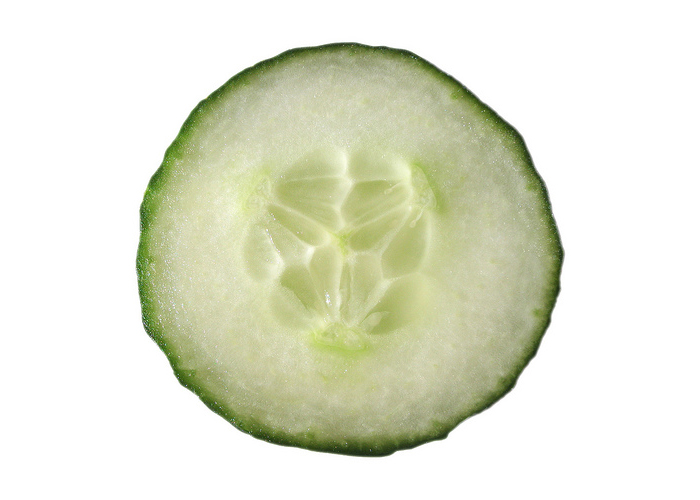 Cucumbers are one of the oldest cultivated vegetables. They are nearly 95% water! Most slicing cucumbers range between 6 and 10 inches long, while pickling cucumbers are between 3 and 5 inches long. Their outer skin can range from dark to pale green, and even whitish. The inner flesh is pale green- white and contains seeds in the center. The seeds are surrounded in a jelly-like substance that becomes more fluid as the cucumber ages. The outer skin is edible, but sometimes peeled for taste or texture.

Store cucumbers in a warmer part of the refrigerator between 45-60 degrees F. Cucumbers will last 7-10 days. Always wash before serving.

Cucumbers can be eaten raw or pickled. Raw cucumbers are great for topping salads, dipping, or making cold soup. Proper pickling is long process, but quick pickles can be made overnight by storing sliced cucumber in oil, vinegar and salt.

Look for cucumbers with no damage, bruising, or discoloration. Bumps can be expected. Bruises and spots, however, should be avoided. Only choose firm cucumbers.

Cucumbers thrive best in warm temperatures and are grown in North Carolina from Spring until Fall. Cucumbers are often at their most productive during the summer.

Cucumbers actually grow on large vines that can produce dozens of cucumbers and spread dozens of feet from the roots. Vines can either be trellised or allowed to spread on the ground. Cucumbers grow under big, prickly leaves, and can be cut or pulled from the vine.

Mediterranean Salad – Wash and dice cucumbers, along with tomatoes and sweet onion. Toss with salt, pepper, and oregano. Drizzle with olive oil and lemon juice. Allow flavors to combine in the fridge over night. Serve cold and garnish with feta cheese. Enjoy!